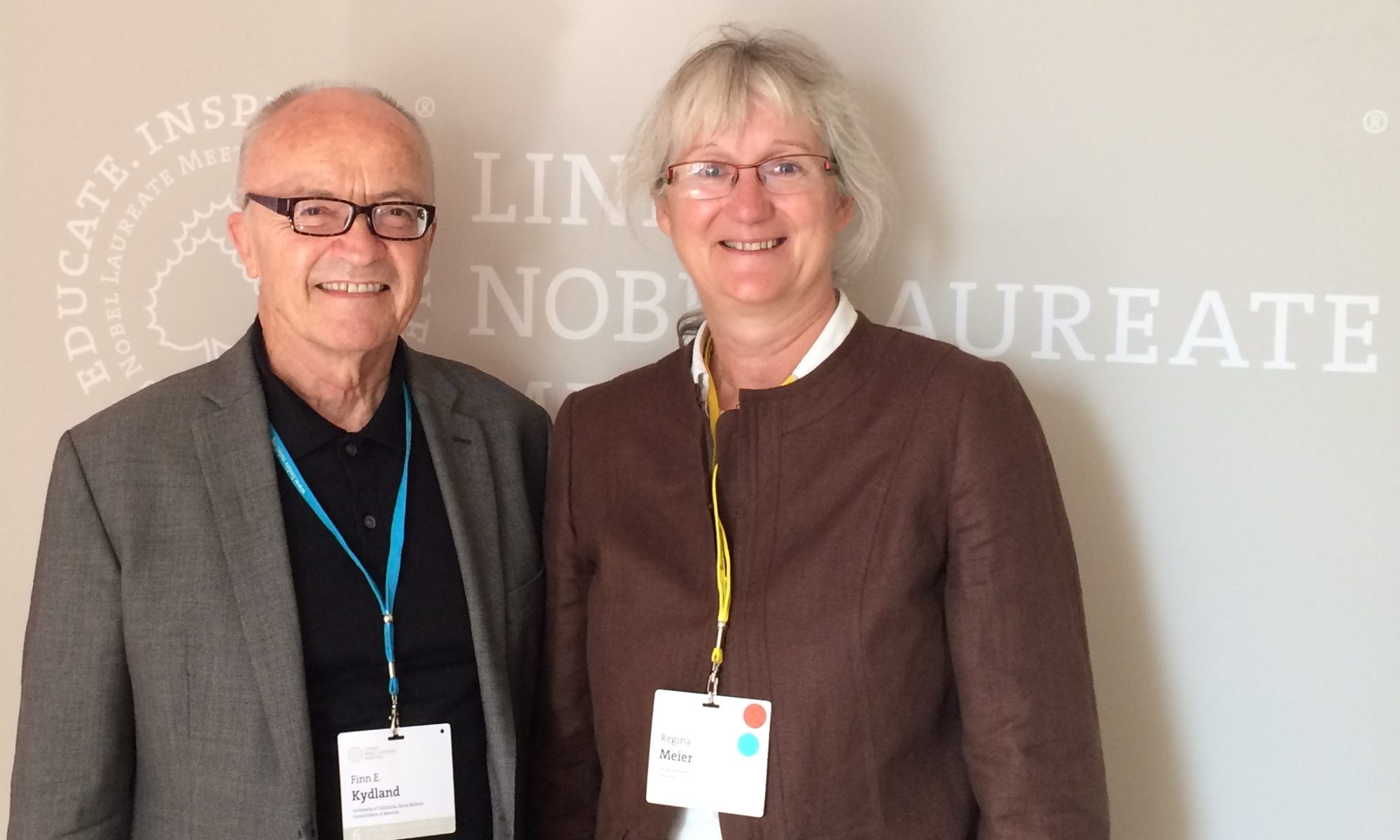 “The meeting of students in North Corea was all for contributing to open their eyes to what goes on research – in the rest of the world.”

“A social responsibility of business in our times needs to create value for the company as well as for the society.”

Meier: You have been at the social meetings with the students here in Lindau and have met lots of young scientists. What are your recommondations for their future?

Kydland: I have no speciftic recommendations. Obviously their main reason they are here are the researches. It’s very important to find an important question to address. To make your findings clear to the reader is a challenge early on. Sometimes if you work on a particular problem for maybe a year then everything becomes so obviously that you sometimes you don’t explain what you been doing well enough for a reader to understand.

Anyway in Pittsburgh where I still go to from time to time  I force the students to present their work earlier that they think they are prepared and I think the feedback is more useful.

Meier: In the seminars here in Lindau the young scientists talk about their researches on which they work one or two years in six minutes in front of the Nobel Laureates. That’s really stress for them – I think. But how do you feel when you here about ten different themes in 90 minutes.

Kydland: I found it very interesting. Yesterday for example we had an incredible variety of topics. I didn’t feel stressed at all. I’m somehow used to this, we have a conference for PhD-Students in Spain.2) They are able to present their researches in front of five or six season professors. There they have more time, they give them an hour each, but it’s the same kind as here.

First time I have been there and participate in this meetings and also give public lectures as a fundraising event. This is just an important event for the students, some of them are from Spain, but the rest from whole Europe – and their preparations are getting better and better.

Kydland: Not very much. I still do my research. I have little less time than I used to have. I was asked more to give key note speeches and that takes some time.

I suppose the main change is that I’m travelling more internationally than I used to. So I have been to China and also Corea.

Meier: So you have been to Corea recently?

Kydland: Last year I went with my wife to North Corea. It was very interesting, it was a scientific event. It was organized by the International peace foundation. Uwe Morawetz called me and asked me if I would like to join them. We are supposed to be six scientists, all laureates from different fields, I was the only one in economics. In the end we were three of us, next to me was Aaron Ciechanover from Israel, and Richard Roberts from Britain. The others didn’t join us, they thought it’s too dangerous.

Kydland: We went there strictly. We were supposed to meet students. The delegation held workshops, seminars and dialogues with students and scholars from various educational institutions at Kim Chaek University of Technology and the Pyongyang University of Science and Technology. The events were aimed to inspire North Corea’s young generation and strengthen international understanding by building long-term bridges between the visiting scholars and local universities.

I’m all for contributing to open their eyes to what goes on research – in the rest of the world. But the person would probably be quite lost unless he or she had a solid foundation in the mathematical tools, as they apply to economics.

We spent there a whole week. The science and technology center is very impressive.

Before we went there we had a stop in Bangkok where the peace foundation has their Asian office where Uwe Morawetz met with South Korea’s ambassador.

Meier: There are serious economic threats in the world, and they are accelerating. In 2008 there was the Lehmann Brothers crisis. In 2011 the financial crisis in Greece almost led to a collapse of the economy. Which issues do you regard today as potentially threatening for the economy?

Kydland: The main threads are restricting trade. The most economics will agree that. Free trade is a good thing for the society.

We have seen in the United States there have been many more tendency from the politicans towards to restrict trade. I think that is very short sighted.

Meier:  There are lot of efforts to strengthen sustainability not only in ecology but also in economics. What does sustainability mean to you? Does it play an important role in your research?

Kydland: It’s an important issue. I have been involved in the topic since years. In May 2012 have been in the panel of the third global Copenhagen Consensus3), their speciality is to analyze the costs and benefits of different approaches to tackling the world‘s biggest problems. There we should rank solutions to climate change and other world problems.

Also at my university for twelve years now I have been the director of a center called Laboratory for Aggregate Economics and Finance (LAEF). In May we organized a workshop “Macro and Micro Economics of Climate Change”. 4)

Sometimes I like to put on conferences on issues that are simply regarded as important but a little unusual in economics so for example we are preparing a conference on the economic indiscations of Alzheimers.

I happened to know because my wife who is a neuroscientist specializing in Alzheimer’s at UC Santa and I knew some neuro scientists who are interested in this conference. I like to be active in these interdisciplinary fields.

I hope an important result of this conference is it will make it clearer to other economists that this is an important question and we will do more research directed towards Alzheimer: there are lots of aspects: The person who is hit by this desease, also the households including the value of time for those who take care. It can also effect peoples savings behaviour, time allocation behaviour, and so on. Perhaps the workshop could bring us closer to answering some of the world’s most pressing questions, including developing new ways of treating Alzheimer’s.

Meier: Let me come back once more to the theme of sustainability. One of the laureates of the Nobel Prize of Economic Science, Milton Friedman, said in 1961, the social responsibility of business is to increase profits. Does this statement apply still today or, was it simply an expression of an earlier time under simpler conditions?

Kydland: In respect of the past I’m voting with my feet. I can tell you that I engage in the

Oslo Business for Peace Award, this highlights ethical and responsible business practices, which is creating long-term success of benefit to their businesses, society and themselves. The honorees should make a positive contribution to society and a personal commitment to work on sustainable business

For four years now I’m in the award committee who cares for the selection of the honourees.

This committee will change in the next time: Michael Spence was serving there about ten years, now he is retiring and will be replaced by Eric Maskin.

There are nominated ten to twelve candidates about we have intense discussion and in the end we vote the years Business for Peace Honorees. The award is one of the world’s prime meeting places for leaders who have as their purpose to improve society in an ethical and responsible way, they are creating value both for business and society. 5)

So a social responsibility of business in our times is still to increase profits, it need to create value for the company as well as for the society.